Welcome to the largest, custom-built indoor skate park in the South West. Built every year for us by a team of pro skaters from around the globe, if you’re into skateboarding, scootering, or BMXing, then this is the place for you. Oh, and did we mention that it’s all FREE?

What happens at the Skate Park?

The Skate Park is open from 11:30am – 10:00pm daily, with a packed programme that includes skate comps, pro demos, open sessions and specific times for beginners, advanced and girls skate.

What kind of set-up do you have?

We’ve got ramps from 2ft – 8ft high, a beasty 5ft jump box, square rails, round rails, a cheeky stair set, manny pad and even a nice big flat space of fresh ply (for monster games of S.K.A.T.E.) Whatever your skill level or speciality, there really is something for everyone!

Take a look inside

I’ve never been on a board before, can I come?

Of course! If you’ve never had a go at skating but fancy stepping onto a skateboard with someone that knows what they’re doing, our team of skaters will be on hand every afternoon to give you some pointers and help you progress in your skateboarding, whether that’s just pushing along, dropping in, or landing bolts on those heelflips.

What else happens at the Skate Park?

The Skate team love to live life to the full, and for us, that means living life with Jesus. He’s literally changed our lives for the better and we get way more hyped from Him than we do from skating! Every day, we open the Bible and pray together – and you’re invited. Our midday ‘skate devo’ has grown over the last few years and whether you know Jesus or not, we’d love to see you there.

Beaver Fleming has been skateboarding since he was 10. Now riding with the Nitro Circus, Beaver is one of the few people who has hit the Giganta ramp on a skateboard, and in the process created some huge World First combos.

In 2017 he made the podium at the Nitro World Games, won the skatercross event at the Clash at Clairemont, and finished in the top 10 at Vans Park Series.

Jud Heald is a pro skater, ramp designer and builder, an ordained minister and the founder of Untitled Skateboards.

He’s been skating pro for over 20 years and been coming to Creation Fest for more years than he can remember! 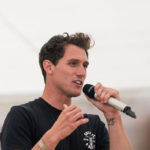 It’s amazing having Creation Fest encouraging all kinds of activities to bring people in to know the fullness of Life in Christ. Love being a part of it and looking forward to another wonderful year of Creation Fest!